The Name is Fleming, Wayne Fleming

However, Belarus can become quite a culture shock for foreign specialists who are coming to this “thoroughly stabilized” country from the “free West”. Here’s what happened to Wayne Fleming. If the contract is signed, he will move to Minsk with his family. There’s no surprise that Mrs. Fleming asked her husband to take photos of Minsk shop windows. After Wayne Fleming arrived in Minsk on May, 30 he decided to invest some time into a small walk downtown. However, when he began taking photos of shopping windows in the center of the city, police immediately approached him in order to find out who he was and what he was doing with the camera. Fortunately, Wayne Fleming was accompanied by Uladzimir Hancharou, Chief Director of „Dinamo“, who managed to explain that his colleague poses no security threat to the Belarusian capital.

The results of Wayne Fleming’s talks with the Ice Hockey Federation of Belarus will be made known today, on June 2.

Ice hockey is, undoubtedly, the most favourite sport of the Belarusian president Aliaksandar Lukashenka. On June 1, he unveiled the biggest ice hockey arena in Belarus – it is situated in the city of Babrujsk and will be able to admit 7,000 spectators. 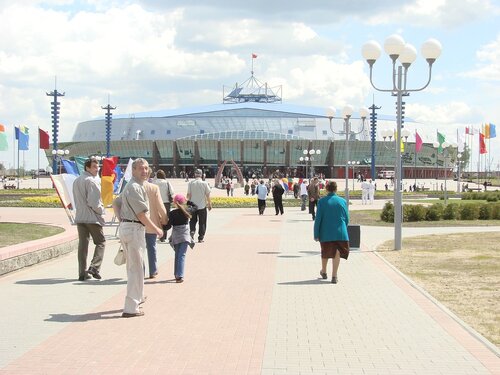 “Babrujsk-Arena” is one of the many expensive sports centers built in Belarus during Lukashenka’s rule. The ultimate goal is to enable Belarus to host a major international competition, preferably the World Championships in ice hockey some day. However, Belarus lost its battle for hosting the World Сhampionships’2013 to Sweden. Nevertheless, new plans for building ice hockey arenas in other cities are being made.